Here's how to install mods for Oblivion:

How to use an installed Oblivion mod: 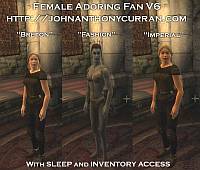 When you become Arena Grand Champion, an Adoring Fan appears who appears to be based on Syndrome from "The Incredibles". He's not the most useful or endearing character, and many players have taken to trying to kill him off in numerous inventive ways.

My mod introduces a female Adoring Fan who performs the same function as the normal Adoring Fan, but with better looks, less annoying dialog, and useful extra features!

It is possible to tell Female Adoring Fan to go to sleep, which can be very handy for players infected with vampirism. You can also access Female Adoring Fan's inventory, and dress her in whatever clothing and armor - or lack of - that you see fit.

Here are some Oblivion mods that I've found to be useful: